Casey Automotive is your complete full service automotive repair and tire shop located in Palatine. Family owned and operated since 1976. 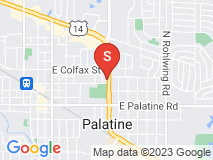 Thanks to Pete and his honesty to let me know about a lawsuit with Honda regarding Honda Odyssey eight year extended warranty on Odyssey Piston Ring problem.
I purchased the van from a local dealer end of Aug. On Nov. 16 the engine light came on and was blinking. I was downtown Chicago. I pulled over, popped the hood and checked the oil. I was surprised that it barely showed on the $@!#%. I had Casey's change the oil when I purchased it. I walked to Target on Street street picked up some oil....started and decided to drive it home. That night I dropped it off at Caseys. Next day, Pete called me and said they did a diagnostic and were getting codes on #3 piston. He said Honda has had issue with piston rings allowing oil into the piston and they have a extended warranty for eight years on this issue. He suggested that I take it to Honda, because the 2013 is still within warranty. Honda ran diagnostic and said....four of the six pistons have this issue. This is a very labor intensive repair and costs $3,000-$5,000 normally. The extended warranty for 8 years is based on the original sales date. It turned out the original buyer bought it in Dec. 2012. I literally had a few weeks before the warranty expired. So a big Thank You to Pete and the gang at Casey's Palatine.

We are so glad that a possible terrible situation ended in a positive one for you! Pete and the staff are always there to help our customers in any way that we can. Thank you for sharing your experience and leaving us this great review .