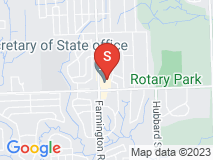 I had my stairs done awhile back and this little guy named Dave did it.
He was really abrasive and kept throwing my things around. He broke my wives vase.
I tried to be nice in the beginning, offered him something to drink.
He was so rude and downright awful.
Anyways, I saw some white residue on his nose. I know it was $@!#%. Wich probably explained how rude and brash he was. Plus how he was just all over the place. He was also on his phone constantly.
I hate to do all this but he is not a good person to have working for your company.