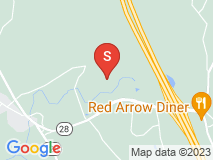 I was very disappointed. They over-promised and they under-delivered. I would not recommend them.

I bought a brand new Ford 550 work truck last year. There were many custom features, and it cost about $65,000. I also purchased a premier dump body for the truck. This dump body was top-of-the-line, and far surpassed the usual line of dump bodies. I mention all this because what I expected was a high-quality work product. A colleague had work done at Donovan Equipment Co Inc. and he highly recommended them to me. I had a benchmark of what to expect from them. So, I dropped off the truck, and I asked them to install the dump body on the truck for me. Dealing with the salesman was great, and I had high hopes for the project. I asked them to do many simple things for me, and there were some different configurations that I wanted on my truck. One thing in particular that I asked them to do, was to install a back-up camera for me, and the salesman verbally agreed to this. There was a little delay in the work getting done, but with the COVID-19 pandemic, that was to be expected.

When I went to pick up the truck, I immediately noticed that there was no tarp. I had paid for a tarp, and they asked me to simply go to lunch, and when I came back, they would have a tarp for me. Now, mind you, I live about three and one half hours away in Upstate New York. It is not a short drive back and forth. When I come back from lunch, they had a tarp, but it was a napkin compared to the heavy-duty canvas tarp that I expected. It was pretty obvious that they just found a spare tarp lying around the place. This was the first red flag.

I drove back home, and then I began noticing other things. For one, the rear poly/plastic fenders were not even remotely centered over the tires. In addition to not being centered, one fender was cantered forward, and the other fender was cantered toward the rear. They should have been mirror images of each other. This was my second red flag.

Then, I also discovered that the rear back-up camera had not been installed. I also noticed that where the body was welded to the frame, that the paint was applied in a very dripping fashion. The paint covered portions of the warning labels, bolts and serial numbers. I did not pay for this lack of attention. I made photos of the problems and sent them to Donovan Equipment Co Inc. They were diligent about answering my emails, and I think that they were sincere about trying to right the problem. They gave me the option of returning the truck to them, or taking it to another dealer closer to my home. They also offered me half-compensation to get the rear camera installed. That job had never been entered on the work order. Rather than making several seven-hour round trips, I opted to have the work done locally.

After using the truck for a while, I also noticed that several of the angled hydraulic brackets seemed to be unusually corroded. I suspect that they sat out in the weather for a while before being installed. I also had one of the plastic fenders crack on me. This can happen as a result of using the truck in freezing weather and hitting a bump. But I have used the truck for a while now, and none of the other fenders cracked. With the lack of attention to detail on their part, I do not know for sure if these were normal wear and tear items or not.

I am a small business guy, and the last thing that I want to do is leave a bad review for another businessman. But the overall lack of attention to detail was infuriating almost to the point of being appalling. Anybody with a moral compass would treat their customer the same if they brought in an Aston Martin, or a 2009 Toyota Camry. But you would think that there would be some extra pride taken in doing work on the Aston Martin. That is the way that I feel about my truck. I went out of my way to purchase top-of-the-line equipment, and I wish that there had been better care taken of it.

I would give Donovan Equipment Co Inc. One and One Half Stars across the board.

We are truly sorry for the situation you have described. It is not usual for us to not satisfy our customers. It appears that a majority of the issue stemmed from the distance between us and the inability to provide a more convenient option to address your issues in a more timely manner. We do thank you for your review and it will be addressed internally as to the issues you mentioned.