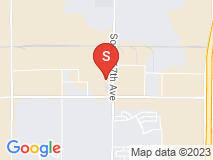 RUN FROM THIS COMPANY!

So where do I start? We hired AZ Moves 4 less, had invoices from Discount Mover and had delivery people from Chandler Movers. When we first talked with John Negrete said everything we wanted to hear when we called the first couple times: gave us a deal on the hourly rate, deal on the 4 day storage and would not take our items off the truck during storage. We had 2 days of moving with them - first day was outside stuff and went directly to the new house. Two old men showed up to move our stuff. Guess who pushed them to keep things going? Stuff gets to our house and they demand cash when John said we could pay at the end by check. And the truck leaked oil all over our street. After arguing with John over the phone and the employees in front of new neighbors, they finally take a check. The driver insisted we write the check out to him. NO WAY! Day two and after we complain about the old guys, two young guys show up and pack the semi real tight, promise our stuff will not be removed during the 4 day storage [as well as John promised] and they dont know why the truck was sent previously that leaked oil. Delivery day comes and we were told we could pay by some stupid app that goes right to Johns personal phone number [does the IRS know about this?]. They refused to remove our stuff from the truck until they had cash... ILLEGAL [DOES THE IRS KNOW ABOUT CASH? ] ! Look at your rights! And the truck was not the same as the one we packed, it was the one that leaked oil. John is the worst business man, yelling on the phone at his workers and clients. He's all buddy buddy - "I normally dont take checks but you guys seem ok". We write him two checks to AZ movers and he cant cash them with some bs story that the bank wont cash checks to business? Another lie as we see online that he did cash the checks. This company needs to be reported to the government for so many illegal practices. Should be out of business. One star rating is too good for this rip off company. As we are still living outside of house as we have remodel going on, not sure if all of our boxes were delivered since they were removed from the original truck, or if anything is broken as many boxes were delivered inside upside down. RUN FROM THIS COMPANY! OH yeah, forgot John was charging us 40 minutes driving time for the truck to drive from central Tucson to our house 10 miles outside of central Tucson "according to Google...". Liar, thief and a bad person to do business with.