Have you ever experienced what it is like to have all of your home comfort control serviced by one professional company? Dial One Sonshine Plumbing, Heating, Air Con 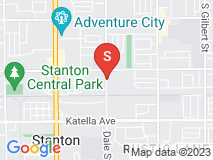 AND TWENTY STARS FOR INTEGRITY