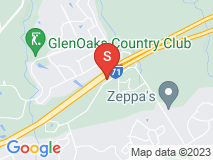 We went to Taylor Homes and two to three other companies until we found Larry Little. He was nice enough to show us what was available. So, we just went with him and glad we did! Taylor Homes built us a 1,970 square foot one-story ranch. My wife and I had spent a couple of years before we built picking out the things we really wanted. We are 70 yrs old and got just what we wanted. Because we are pleased. we will continue using their service. They started building in April and we moved in by the end of September. Mike Harris, the Superintendent came by every day to watch over the project. When I pointed out a little flaw, he would say to me that he had already seen it. He took care of it already. The things they did I didn't even know they would, like insulating under the house. The bricklayers were fabulous! They made some fancy things like we had never seen before. Doug did the baseboard and trim. We have never seen anyone better than him. The cabinet people furnished the most beautiful cabinets. We are really pleased with Taylor homes. We would definitely build with them again. Anybody else using them would be just as pleased.

Mr. Scott; thank you so much for your kind words. The Taylor Team truly works diligently to ensure our valued customers are fully satisfied. We wish you many years of happiness in your new Taylor home!
Sincerely,
Chris Taylor
President/CEO
Taylor Homes