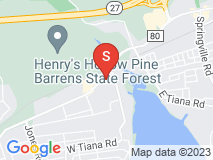 I hired Flanders Heating & Air Conditioning to have a new furnace installed in my daughter's place, and they did an alright job. They were originally going to leave the furnace sticking out into the hallway, which was not satisfactory at all, so we let them know and they re-adjusted until it was fixed. The install went well, but then my daughter noticed the next day, that there was a hole in the wall where we assume they bumped it with the old furnace, causing the damage in her sheetrock. Overall though, they were good.