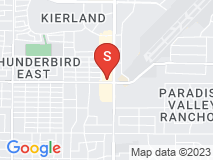 Went out of their way to save our project!!!!

We ordered about 1,500sf of tile from a different company/distributor, unfortunately not knowing that Arizona Flooring Brokers could get us the same tile. Once we had installed the tile we ordered, we found out we were short about 50sf (my mistake). I couldn't get a hold of the distributor we placed the original order with and we were two days from moving back into our house. I luckily found AZ Flooring Brokers and called them. They answered the first time I called and within 30 minutes Jason called back. He had found out what exact tile I originally ordered with another company, and was able to call the manufacturer, who unfortunately told Jason they had discontinued our tile altogether, and they only had scraps left of several different "dye lots". Without hesitation, Jason had the manufacturer put all of the different leftover boxes of varying tile dyes on a truck, before we even decided what to do, or had given him any money. After talking it over, we decided to take all of the tile they had left, even if some wasn't a perfect match. The tile (coming from CA) was in the distribution warehouse THE NEXT DAY in Mesa, AZ for us to pick up and have our installers finish the job. The other "dye lots" ended up matching perfectly, you would never know they weren't identical, and Jason literally saved our job, and we are able to move back into our house as scheduled. Jason and AZ Flooring had no reason to bend over backwards for us, but they did, and have now earned a customer for life! Thank you so much Jason and everyone who helped!