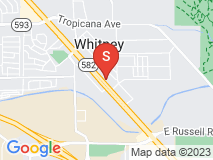 Ice was melting in the refrigerator freezer. I called our (soon to be former) home warranty company. They sent out a guy that said it was either Freon or the compressor and that he had to get authorization. I called them the next day, they don't even answer their phone. When I do get through, they tell me the parts aren't in Las Vegas and they'll arrive in 3 business days (over July 4 weekend). So I called ProServe. They answered the phone on the first ring and sent out Hector first thing the next day. He diagnosed the issue - broken fan motor - (not Freon or a compressor). He didn't have the part on his truck, but he returned that same afternoon with the part and fixed it. Highly recommend.