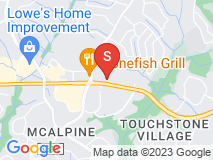 Owner Arvil Price does not stand behind the company's mistake

I used Americas Choice for home inspection and my issue is the following. We had a young man Matthew who did a nice job inspecting the inside of the house and attic. However, the previous owners had some of the garage filled with their possessions on the left side of the garage. See below: (This site doesn't take paste pictures)

The rest of the garage was empty with all of the walls showing the base. After we moved into the house we wanted to get on contract for pest control and we were told by 2 companies that we receiver estimates with that we had a termite issue all over the garage and not just the wall that was covered by boxes. See graph from the company that did the work identifying the locations of the termite tunnels.

I put in a complaint with Americas Choice since I paid extra for a termite inspection. I got nothing but a run around from the owner Arvil Price, who I see has complaints about him and his company on this site for not honoring or admitting his companies failure to find an issue. I was told that Matthew would have to come back and take pictures of where he missed the tunnels. I went into work late to meet Matt the next morning and I showed him what he had missed. He agreed that he missed them and took plenty of pictures. He said the company recommends a pest control company that is licensed in both North and South Carolina. I said I wanted to use my own guy who I already felt comfortable with and Matt said no problem. I spoke with Arvil again and he said that he owned and was a licensed pest control company and he wasn’t going to pay a competitor any money. If I went elsewhere, I’m on my own. He said he would contact me either that night or early in the morning. Never heard from him or got any return calls. I tracked down his cell number and texted him. This is the conversation:

I waited for Ted to call and when he didn’t call, I decided that I would have the work done. I wanted nothing to do with Arvil or his company. Ted ended up calling over a week later. Since then I have been in contact with Americas Choice and it’s been very frustrating. Long story short, all Arvil had to do was admit his company’s error and make it right, which he did not. Not good for business.
Bottom line is this, if everything goes well on the inspection, all is good. If something goes wrong, don’t count on this company to correct matters and make things right. I found Arvil Price to be very arrogant and a complete $@!#%. You need to hire a good company that has a good history behind it. And as far as termite inspections, call a professional company and keep it separate from the home inspection. Matthew obviously missed the termite tunnels if he looked at all. He might have just thought the wall on the left was blocked and didn’t really look. Not sure how he could have missed the other walls that had these below, but don’t let this happen to you. It cost me $875 plus tax. Stay away from this company just in case something does go wrong with your inspection and you need to make it right. Termite tunnels below: