Parents and students alike can rest assured knowing that Driving Arizona will provide the best environment for acquiring the skills to become a confident driver. 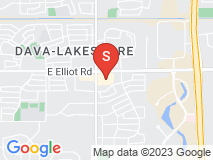 I chose Driving Arizona based on Yelp reviews. I was a little concerned about a few negative reviews regarding the time lapse between receipt of payment and commencement of classes. So, I called Dave and was assured that, based current scheduling requirements, a driving instructor would reach out to us within the next two weeks. Two days later I had a text from Meher Bahlous saying that he had a cancellation and could start my son's lessons that weekend! My son was incredibly reluctant (because he already knew everything about driving . . . !) so, I was concerned that he would not make the most of the lessons. I really didn't need to worry - Meher was amazing, he treated my son like a young adult, gave him practical advice, and top class instruction. My son came home raving about how cool and funny Meher was, how his lesson had flown by, and how much he'd learned. He literally couldn't wait until his next lesson. Most importantly, his driving skills improved immediately. I can't speak for parents with girls, but, if you have a reluctant 16 year-old son who thinks he is already an amazing driver, call Driving Arizona and ask for Meher!