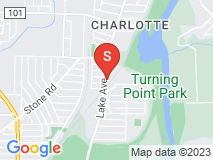 Driver was very rude. Showed up early and called to say he was on the way. I said I'd be there in 15min. He was obviously upset I wasn't home yet. I asked where he was and he said sitting in your driveway giving you the benefit of the doubt. I told him a was close and would be there in 10-15 minutes. Since he called ten minutes before arrival estimate of 11am-2p that would make me about five minutes late. He scolded me over phone and acted like he wouldn't let me off the phone (chewing up time for me to get home). I suggested if it was a problem to go to next stop in Hamlin which he shared earlier. He said that was twenty minutes away. Okkk don't care at this point.... Arrived at 11:10am they were done with delivery and install by 11:20a. I was furious with his lack of customer service skills and attitude. As I drove home I was seriously tempted to cancel the order and send back because of this. Lucky for them I really needed a washing machine asap. Teach your drivers some customer service basics like don't be rude, customer is always right, and say what you can do, leave your frustration out of it. I'd be happy to teach them how to.