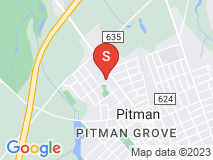 My parents moved into Pitman Manor in 2010, giving up living in their home after 68 years. We were very concerned how they would manage the transition, having become somewhat isolated in their late 80's. The staff of the Manor soon encouraged them (gently) to move about and they began making friends. My mother broke her hip a couple of months after moving in and the staff really looked after my father. When my mother returned, she was determined to be strong and exercise by walking the halls and meeting people. When my father died the next year, the whole community supported my mom and she blossomed even more, playing bingo, scrabble, fraffle and making even more friends. Had they stayed in their home, none of this would have happened and we may have lost both in short order. Pitman Manor has been the best thing for my parents and I thank God for the love and support they have received from the staff and residents.