Business Description:
As a family-owned and -operated business since 1994, Carl's Van Rentals has been providing affordable van rentals to residents & vacationers throughout Florida.
5 68 reviews 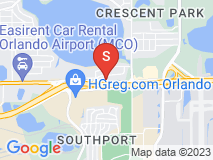 I had a fantastic rental experience with Carl's Van Rentals. I had called three other services before I called them, and all of them had such a low level of service that I was almost offended. It was as though I was doing them a favor by renting a car from them. My niece was sitting next to me, and she was floored by their low level of service. When I called Carl's, it was better service than I would have expected. It wasn't just average; they were extremely helpful, courteous, and patient. When I actually got there, the people were extremely nice to me. On top of all of it, the van I ended up getting was maybe half the price of the cheapest I had found anywhere else. I'd highly recommend them without hesitation.