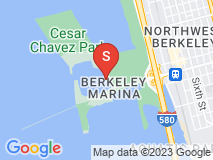 Great way to spend an afternoon!

We hired Compass Rose Yacht Charters for a cocktail party in the Berkeley Marina for our daughter's 40th birthday party. Neither we nor David, the owner, knew that there was a kit festival at the Marina that afternoon, and there was no parking and no one could get in. The traffic was horrendous and the guests couldn't arrive on time. I was very upset since we only had the yacht for a certain amount of hours, and when we were all set to leave half the people weren't even there. I was worried they would say we were out of time right when everyone started showing up.

They were very accommodating and laid-back. They said, "Don't worry about it, if we don't leave on time, it won't be the first time." They reassured me everything would be fine. Maybe we didn't sail as long as we'd have liked to, but they went ahead and served cocktails and hors d'ouvres while we were sitting in the marina not moving. They didn't let me worry about it, and once we were underway everything was fine. The food was just fine. There were four or five people on board who were very helpful- they tended bar and served the hors d'ouvres trays. It was a pleasant experience, even though I was nervous the first few hours.

We had 40 people come, and it was a good thing it was just cocktails and hors d'ouvres, not a sit-down dinner, because the upper part of the boat was hard to get to. The older people at the party could not climb the ladder to get up there; it was quite steep, with 10-15 rails. A lot of people didn't go up. Even though they say they can accommodate a whole lot more than 40 people, it would have been very tight since no one went up to the top level.

I can't praise the captain and crew enough for reassuring me: "Don't worry about it, we'll play the music, have another cocktail." They were quite nice about that!