The Handyman Company is a trusted remodeling & repair company providing residential and commercial services since 1999. Proud Member of the BBB & our 1 Year Warranty 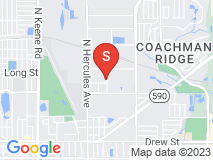 Had several screen panels on my pool enclosure that had torn at the bottom. Several had just become weathered and appeared ready to fail. So I called the Handyman Co. on a Tuesday, early morning. They scheduled a date for a repair person to come and give an estimate the next Tuesday. About 30 minutes later, I received a call saying they had a person available in about an hour and could they come that same day.
The repair person arrived in about 40 minutes. He viewed the problem screens, took measurements and called for an estimate. He then stated that he could do it immediately. The pricing was good and the timing excellent.
Mr. Doug Allen then went and purchased materials. Arrived back and immediately went to work. He worked without stopping. He had to make one more trip for materials. He made certain I knew that he would be leaving and would be right back. He was back in no time and went back to work. He finished shortly after. The job was completed within the estimated time frame.
Mr. Doug Allen made the job so effortless for me. He explained everything. He was always making certain what he was doing, what he was going to do and making certain my property (when he left) looked just it did when he arrived. He was extremely happy and fun to be around. He knew what he was doing.
I will continue to use the Handyman Co. for my jobs. They are a great company to have available.
MGill