We serve all of Arlington, Alexandria, and Fairfax. We may also serve other locations such as Washington, DC, Maryland and more distant areas in Northern Virginia 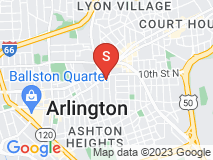 We had a problem with a shower that was making a knocking noise and alternating between very hot and very cold. I called All Plumbing at 12:30 and the nice lady on the phone scheduled us for between 3 and 5. At 2:30 Mike called and said he would be at our house in 30 minutes. Right around 3 he pulled into the driveway. After I explained the problem, Mike disassembled the shower handle and removed it. The contractor had installed the shower enclosure in such a way that it required a great deal of ingenuity and care to remove the cartridge without losing the 4 retaining screws behind the enclosure. Mike figured out a way to do it, and thought that he had a replacement cartridge in the truck. It turns out that he had to go back to the All Plumbing shop in Arlington to get the part. Meanwhile, I had to leave the house to pick up my wife in DC. My son payed Mike after he returned and completed the repair. My wife and I got back and found the invoice to be much less than we were expecting to pay. We couldn't be more pleased with All Plumbing in general and Mike in particular. We will definitely use them for all of our future plumbing needs. Highly recommended!!