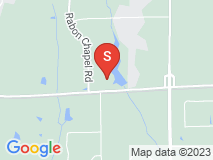 Sterling responded immediately. They walked through seeing the mold and water damaged area where we had recently moved a built-in cabinet in my hallway. It was explained that we wanted all of the damaged sheet rock replaced and the AC return vent moved and centered in the hallway. I had bought a new 24" X 24" metal return air vent, which was to be centered in the center of the hallway. At the other end of the hallway is the attic stairway, thus the rafter is already cut. I received a bid that did not include the moving of the return air vent.

I called and explained that the bid did not include the air vent being moved. I was told that they normally don't do things like framing but the guys would be able to do it and i accepted the new bid. The original bid was for $950 and the second bid was for 1,450. On the day of the job the crew arrived promptly and began work. They had a half of sheet of drywall. They took out approximately 6 inches of drywall where the fiber board AC return vent was. I came into the hallway and saw they were trying to put the return air box (approximately 20-25 lbs) into the ceiling being suspended by 1 x 3's. The crew had been working on this for almost two hours. I interjected and explained that they need to frame the box out with 2X6's. I showed them that the rafter was cut at the other end where the attic stairs were and needed to be supported. I also showed them that it was already sagging and there were cracks across the ceiling. The crew went to get a 2X6. They finished the repair and the bill was paid immediately.

Approximately 6 hours later I noticed bleeding through the dry wall repair. In the morning I went up into the attic and found that 2X6 that was put in was pieced in between the joists and was not really supporting anything. They had used 3 screws total. One on each end and one in the middle to join the two pieces. There were two loose 1x3's placed between the box the 2x6. The area where it was bleeding through I could see that they had moved the insulation and could see mold and damaged sheet rock.

I called Sterling in the morning and explained that I was not happy that the stain was bleeding through the ceiling and that they had not properly framed out the return air vent. I was told that they really do not do framing and they were just trying to do me favor. At the price of $500. I was asked what I wanted to do and I told them that I would tear out the moldy sheet rock and frame the area and they could just come back and sheet rock the area. I did not ask for a REFUND, Terry texted me later that morning and said, "Philip, We will get you a refund on part of this when the smoke clears & we see where we both stand. I would appreciate your input on what you that would be fair." I did not reply, I just want my ceiling and drywall repaired and done right.

After I returned from vacation. I tore out the sheet rock approximately 5' X 5' and framed in the vent box. It took 2 hours and the framing without screws was $11 for 3 2x6's. I called and a crew came out the next day. They made the repair and it looks great.

I had read almost all of the reviews and felt comfortable with asking for this type of repair. Their website, indicates that they can handle anything. "Sterling Drywall Repair will make your problem go away by completing other tasks related to your drywall damage, such as: insulation replacement, rotted or termite damaged wood replacement, trim replacement, painting, wallpaper removal & other tasks needed to keep your project from dragging on contractor to contractor." including:

When I called Terry about the job earlier today and about the possible refund. It was not pleasant. Terry started by saying that they had to do the job twice and that I had insisted that they do the framing. Terry understood that I wanted the AC vent moved and if he did not feel that they could do the framing, just say so. I would have found someone else. No he quoted $500 as a FAVOR. I explained to Terry that I did not see it that way and that my wife and myself had asked about the moving of the AC return. He agreed to to the work and frame out the return air box.

I tried to explain to this customer, we dont do HVAC work & our guys are not framers.(that is why i didn't bid it in the first place) They are expert drywall repairmen. We do other(not all) tasks related to your drywall repairs. This was not related to his drywall repairs. It was something he wanted to get done w/o hiring another company. He argued over the phone that it would be a super simple process to move this return vent over a few inches. I tried to get him to hire someone else for this phase of the project or do this part himself(which he eventually did); but he insisted our guys could handle it. We relented & told him we would give it a shot. As it turned out; because of where he wanted it moved to, the framing became structural. Also he added at least one item that was not on his contract ( replacing part of the apparatus with a new part he had purchased. Instead of stopping them when he could clearly see they were unskilled at what they were trying to do(as I told him to begin with), he let them complete the job & then tore it all out & re-framed the job himself. He removed about twice as much sheetrock as was on his contract to begin with. We came back and replaced all the removed sheetrock; finished, textured & painted it at no extra charge. This customer misrepresented this job & then after our guys did the best they could to do something I already told the customer they were not skilled at; then wanted a refund. After we debated who said what for about 10 minutes, I asked him how much he thought we should refund him & he said he wanted "nothing".
Sterling Drywall Repair bends over backwards to please our customers. Now & then we will even go down a road we don't feel comfortable going down to accommodate them as in this situation. We were(as always) up front with this customer about everything.