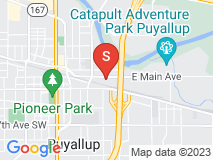 It made what I thought would be a complicated purchase very simple.

I bought from Abbey Carpet & Floor a room full of carpeting--with closets covered too--and a pad. The only reason they didn't get all five stars was because they showed up two hours earlier than I had expected. But it worked out fine since I was able to get home five minutes before they arrived. So, it was good. They did a really good job, and what impressed me the most was that they were so knowledgeable of the laying of carpet and so efficient in cleaning up and carrying away the old stuff. I love the new carpeting and will be calling them later this year to do another room for me.