Perfect Body Laser & Aesthetics reviews; Ranked #1 in NY by Solta Medical & Cynosure since 2007. The best FDA lasers with, No Needles, No Cutting, No Down-Time® 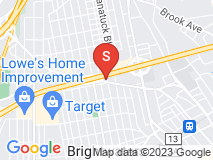 I highly recommend it!

The Aestheticians here are great!  I've finished four treatments of Laser Hair Removal with their laser and the results are amazing! I like that it has different levels of intensity. At my first appointment, the aesthetician suggested I try the less intense mode, because it was my first time. I was a little nervous, but she made me feel really comfortable. It was not bad at all!  When I came back for the next treatment, I wanted to try a bit higher intensity, because I heard it was faster.  It wasn't even really painful, and it was so much faster than the less intense mode.  But to each his own. I know it takes multiple treatments, but they have really great packages.  Even after the first treatment I already noticed a massive difference!  It's so worth it to not have to worry about shaving your legs everyday!  I can go up to a month now!  I can't wait until I won't have to worry at all!  I also did a chemical peel with Alexa on my face the other day.  This was also my first peel, but they had a really good special going and I couldn't resist this major deal so I went ahead and did it! Alexa was great!  She explained to me exactly what she was going to do and what I was going to feel so that I wouldn't be alarmed.  Everything went as as she explained.  She was so gentle, and it felt so nice when she was massaging my face.  I never had a facial before, but if they feel as nice as what Alexa did during my peel, I might just have to start getting them. It felt a little tingly, like if you had a fresh sunburn, but it only lasted for a few minutes.  It's my second day, and I've already started peeling, and the skin underneath looks great! I thought the office was really nice and modern to begin with and the spa rooms are beautiful!  All the other staff is really great too.  I always feel like I'm going in to meet friends whenever I have a treatment. I've also run into the owner a few times leaving my treatments, and he's a really nice guy too! I love this place, and I highly recommend it!