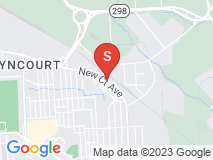 I'm happy with their work! Quick response to emergency need!

Overhead Door Company of Greater Syracuse came to my rescue when my garage door popped a spring after I parked my car and closed the door. I had used Overhead Door Company many years ago when we first moved in, so they were my first call. They couldn't come right away but managed to make room in their schedule for the next morning. I rearranged my plans for the four-hour window they gave me. Well, the repair guy showed up thirty minutes after the expected time and then said he wanted to eat lunch before getting started, which was fine. I had told the person over the phone that it was a broken spring, but the repairman didn't come equipped with a replacement. He had to measure the part, then go back to the shop to pick it up (and I do not live close to their location). By then, I had to cancel my afternoon plans since my car was still trapped. At four o'clock the job was finally done. I'm happy with the repair and the door now works perfectly. The repair guy was nice and so was the person on the phone. I wish they had communicated with me as their schedule changed so I could have better planned for my own appointments.

Nancy S,
As we strive to make sure everyone of our service calls go as perfectly as we planned we do at times fall short. We in fact fell short on your call and I do apologize. We thank you for your honest review and we will surly go over the issues that occurred and make sure we improve on them.