Since 1979, our family business has helped thousands of Nashville area homeowners discover the kitchens and baths of their dreams – right in their own homes. 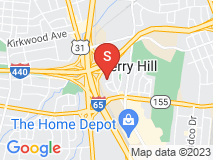 This was the first time I ever used Hantel Kitchens & Baths, and I have to say that they exceeded all expectations. Originally, I just retained Ed Hantel, the owner, to do the design work for me on a major kitchen renovation job. But, I was so impressed by his design plans, and the way that he talked about how the job would develop, that I hired his company to do the construction work. And I do mean a major renovation, because the existing walls were torn down to the studs on this. Counter tops, cabinets, walls - I mean a complete and total kitchen renovation.

Hantel Kitchens & Baths finished the job on time for me, and to be truthful, they were under some time pressure. I had planned to have a holiday party, and I wanted to have the kitchen renovation done before the party. The whole Hantel crew worked diligently to accomplish this. There were five people in the crew, and they worked long hours to make sure they finished in time. They even stayed late the night before the party to make sure everything was in tiptop shape!

As far as the crew, I was also impressed by the fact that the owner himself worked here, to make sure everything proceeded as planned. Speaking of the crew, they were all very courteous, nice, and professional people whom I was happy to have in my home. Prior to actually starting in on the actual construction work, all the items they ordered were delivered, so they could be checked out to make sure that the proper items had been received. Plus, there would not be any work stoppages waiting for something to be delivered.

I can not say enough good things about Hantel Kitchens & Baths. They had to tear down old construction, and then rebuild everything, and they did it on time. The construction contract was very professionally executed, and in great detail, but also very readable and understandable. And, when the job was finished, it came out exactly as specified in the contract. Hantel's was so precise, that even the cutting board was exactly what I ordered. Everything was precise down to the smallest detail. Like I said before, Hantel Kitchens & Baths exceeded every expectation!