Floors to Go East Fort Worth

We are a division of Floor Partners offering residential and commercial flooring, Kitchen, & Bathroom items. 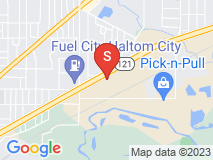 Floors to Go East Fort Worth

Floors to Go sold us flooring and had installers come out and do the job. The installers were wonderful. They came in and were so pleasant and said, "We've been here before" because about 8 years ago, we had our garage changed into a studio and we had carpeting and ramps for my husband's wheelchair put in. They were so kind then, and have even improved since. There were three gentlemen and they just worked so hard. I said we wanted to buy them pizza for lunch and they were so gracious to say how much they enjoyed it. They got here at nine and worked here until late. They never stopped working. It's a beautiful job. Every time that we walk into a room, we say "Thank you, Floors to Go." It's such a perfect job. They went and put the cord-coverings around the room. It looks so professional. We will eventually use them again, because we want to change our den, our hall and another bathroom into this type of flooring. Jesse was the one that suggested the type that has grooves, because our house has shifted like all of the other houses around here. He said that with this type of flooring it won't crack. From beginning to end, the experience was wonderful. I had called and asked if Jesse could come out because he had done the kitchen a few weeks ago. He brought out samples and gave me advice. My daughter had recommended them to me and had said, "Floors to Go won't let you down" and she was right.