Don't settle for anything less, call the one that "soot's ya best!" 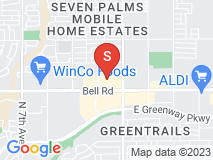 I had a good experience with Arizona Chimney & Air Ducts when I called them in. I had a new dryer in my house, less than a year old. Which is why I couldn't imagine why it was always showing that there was something wrong with the ducts. That's why I called in Arizona Chimney & Air Ducts. The guy came in and he went up on the roof. And I was totally surprised when he came back with a large back full of lint! He said that the duct was almost 80% full. I thought their rate was on the expensive side, but I had no idea how full it was and I certainly didn't want a fire. It was a good thing I called them. They were polite, friendly and professional in the work and since then, everything has been working well.

Hello Judy, Thank you for sharing your story. We hear this many times with the new smart dryer technology. They can actually sense the blockage and let you know the vent is clogged. This has saved many homes from a fire. We appreciate you giving us a call, thanks again! Becky