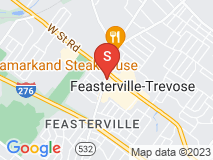 Several years ago I hired another local outfit to replace carpets upstairs. They were Really Nice, but I recall a smallish selection of carpets from which to choose, and after it was installed ... ehhhh .... I could see seams between rooms where I had never seen them with the previous carpet, there's that ONE tiny corner where they didn't cut all the way to the wall near the closet (it's hard to see, but trust me, I see it), and the carpet started to look far more ragged after a few years than I would've expected. So I tried Buck County Carpet. Their rep clambered through their big green van as she got samples -- a good supply, brand names, and she explained the benefits of each one so I didn't feel I was paying for anything I didn't need. The price was most competitive (I got a few quotes), the work was done on-time, my basement has better padding than before so it feels more welcoming as a family room, and -- most importantly -- nearly two years later and it still looks great. No seams between pieces, no tiny blunders that drive me crazy. My only gripe was a little crackling sound from the padding membrane when I stepped on one particular spot, but that went away. Some people may prefer a more froufrou company, but these folks weren't. They were no nonsense, and acted like they wanted my business. I almost never write reviews, but I wanted to give them a long-overdue shout-out.