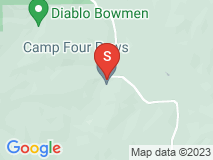 He's probably 100x happier at Camp Four Paws than he is at home!