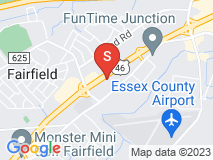 When I called them, the designer came immediately on time. He was helpful. He knew what he was doing. He was very honest. He took his time. He was polite, courteous, and I just love him. His name is Michael **. I think he's a design coordinator. He told me what I had to have done. My problem was the tile in the pool was coming loose. And he had said that the mastic around the area between the copings and the deck had to be replaced. It's like (sort of) a spongy stuff, and that allows the deck and the coping to expand and detract. That water was going in between there. Thus, the tile was sloughing off. So I needed to replace the tile and the coping.

He sent me an estimate immediately. Well, everything describes you the penny. He came with samples. He was really helpful in helping us decide what we wanted, because when you have all of these choices, what happens - the husband wants one thing, the wife wants another thing. He says that he's actually had to walk out of houses because the husband and wife are fighting. Then I selected what I wanted and they've had us scheduled and they gave me a phone number to call. The scheduling went right just the way they said it would.

The people that came, the first day they came and they removed the coping and the tile (two of three). They came early in the morning. They worked throughout the whole deck. I think they finished up around four o'clock. They cleaned everything up. You would never know anybody was working there that day (and this was hard work). It was unbelievable. I've had a lot of stuff done on my house. I had siding done, roofing done recently. And no one was as meticulous as these people. Two days later, they came to install the tile and the coping and the same thing. It was a different crew, but they were excellent. They knew what they were doing. They just worked right through the day.

Then a couple of days later, the people came to put the mastic down. And that was just about an hour job. They were done in no time. And then Mike came after everything was done to investigate and see that everything went well. It was a lovely experience. Believe me because I had to reschedule (I think) the initial tile and coping removal and I had the number to call and this gentleman then answered the phone - the scheduler was just polite; and whatever day I said, they were available. And like I said, I was so shocked because most of the time I usually have a problem. They were excellent people. I would recommend them anytime.

My pool is 23 years old, and this is the first problem I have ever had with it. I maintain it myself but Anthony installed the pool. This is before they merged into Anthony & Sylvan. It was an Anthony pool. Initially, I had their maintenance people come in. My husband's pretty handy, and he's been taking care of it. Overall, I found them to be professional, courteous, and meticulous in their work.